Yves Dever caught the cabinet-making bug at an early age, as he whiled away the hours in his grandfather’s workshop.

Born in the midst of wood shavings, furniture very quickly came to populate his drawings.
The INTERNI collection was the fruit of the fertile contacts developed with his clients.

The first models in the range were presented in Paris in 1991 at the Maison & Objets – Scènes d’Intérieur International Trade Fair. Success came hot on its heels.

The feel of the Collection is reminiscent of the lines that have become associated with other designers such as Christian Liaigre, John Pawson and Andrée Putman.

They also draw their inspiration from architects who left their mark on the 1980s and pay tribute to prestigious interior decorators such as Jean Michel Franck.

The aim being always to give a contemporary slant to the work of these groundbreaking creative geniuses.

Today, this tradition of « craftsmanship » is being kept alive by the designer’s team headed by Jean Pierre Pirson. He guides the work of the craftsmen by observing  and building on the foundations laid by Yves Dever.

Janine Vandebosch, a graduate of the Academy of Antwerp, directs the creations and the design. She has always maintained the simplicity and purity of the lines while conjuring up a collection that is constantly renewed, rethought and reworked. 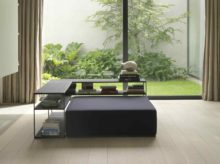 Create a new list
We use cookies to ensure that we give you the best experience on our website.Ok